Why Next-Generation PKI Will Reside on the Blockchain 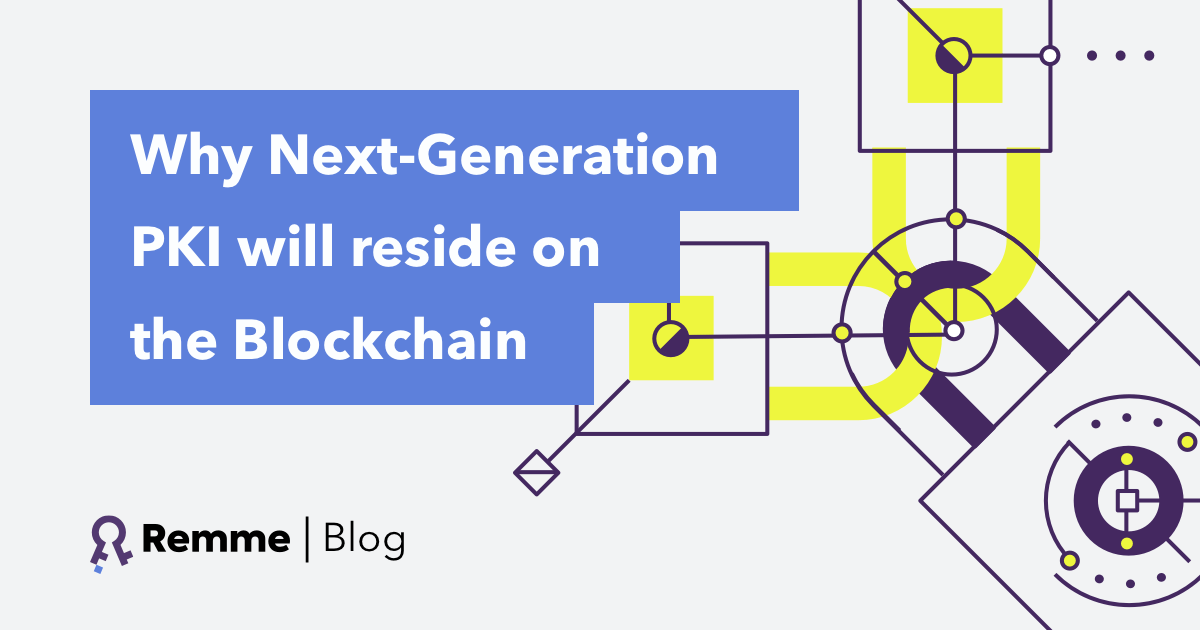 Public Key Infrastructure (PKI) can be traced back to the 1970s, when major encryption breakthroughs from a pair of British intelligence agency developers shaped the future of key distribution. The tech world has changed immensely since the 70s, and yet PKI has scarcely evolved. While the underlying algorithms pioneered by the UK Government Communications Headquarters James Ellis and Clifford Cocks remain as precious as ever, the way in which public keys are stored and accessed is no longer fit for purpose.

In today’s hyper-connected, hyper-adversarial environment, enterprises face a barrage of web-borne threats from attackers intent on penetrating their systems and exfiltrating their data. Your Public Key Infrastructure holds the keys to your entire digital kingdom and as such must be protected at all costs. The exponential increases in computing power over the last 30 years have mandated a transition to more secure algorithms, such as from 160 to 512 bits, but they have not succeeded in invalidating encryption itself. Cryptography today is as robust as ever, and yet that hasn’t prevented PKI from being fundamentally undermined.

The problem with PKI

The greatest threat that PKI solutions face stems from an inherent flaw in the ecosystem that houses them. Certificate authorities (CA) are responsible for digitally signing and publishing the public keys, which is generally performed using the CA’s key. This presents a single, centralized point of attack. Compromise the CA, and the entire suite of keys they oversee is in jeopardy. The security problems that are associated with CAs don’t end there. Other issues include:

PKI is in desperate need of an overhaul to eliminate the security holes that threaten an otherwise sound means of securing enterprise systems. Our proposal for achieving this is through a PKI (d) solution – a decentralized Public Key Infrastructure. Remme Protocol is a distributed and decentralized solution in which public keys are stored on a blockchain, eliminating the centralization problem that is inherent to certificate authorities.

According to 2018 Global PKI trends study the key challenges for PKI implementation in 2018 were:

Blockchain refers to the distribution of data held and updated individually by each participating system or node in a network. The data is replicated, shared, and synchronized across these systems. The way blockchain differs from a usual server-client system is the absence of a centralized server or system to process and store the data.

Imagine having a spreadsheet, but instead of being stored on a shared drive, each client stores their own spreadsheet with the same content. When a change is initiated, consensus between all systems in the distributed network is met before the update takes place. In a blockchain environment, records are updated and stored on each of the nodes independently. They also continually check and reconcile the data to ensure consistency and finality.

A prerequisite for smart contracts to operate effectively is the accurate predefining of contractual terms to be agreed upon and programmed as the conditions of execution in smart contracts. This will ensure that the self-executing smart contracts process the transactions according to requirements. Any intermediaries required for such transactions can be removed, and human intervention in the process will also be eliminated, providing a more efficient and error-free process. All this creates a new paradigm of next-gen PKI that is run purely on transparent and publicly auditable smart contracts.

The intersection of PKI and IAM

Remme’s blockchain-based PKI solution, while presenting a clear departure from the centralized model favored by CAs, is not as radical as it may seem. In recent years, a number of major companies including Microsoft have pushed for blockchain identity solutions. As a result, awareness and demand for blockchain-powered PKI solutions has grown substantially, which could prove lucrative for companies that provide the underlying blockchain technology including the applications required to interact with it. The Identity and Access Management (IAM) market alone, for example, is expected to reach USD 24.12 billion by 2025.

Many of the characteristics for which blockchain is renowned are naturally suited to identity and access management. These include built-in transparency, censorship resistance and widespread availability via a distributed network of nodes.

Blockchain-based solutions do not require any specialized standards to operate with data on the blockchain – they only require software that allows them to interact with the chain. This enables IT systems to verify certificates with APIs for interaction with the blockchain and ensures interoperability with all platforms (server, desktop or mobile). Further advantages of blockchain in the context of PKI and IAM include the following:

The benefits of Remme Protocol

Remme’s take on a next-gen PKI, utilizing blockchain technology, has a number of clear benefits over the traditional PKI concept with the CAs at its core. For one thing, man in the middle (MITM) attacks become nearly impossible as a phenomenon. Enterprises, individuals and the apps interact directly with the blockchain with no intermediary, eliminating the ability for hackers to introduce MITM attack vectors. From a security perspective, Remme Protocol is also bolstered by the long term economic incentives provided to the Block Producers tasked with validating transactions on the network. This ensures that there will always be a required quorum of Block Producers to ensure sufficient decentralization and prevent the blockchain from being manipulated by malevolent entities.

In addition, the financial model that Remme Protocol incorporates has no inflation, which grants stability and surety. The network provides services that are re-priced dynamically to fiat currency, ensuring low volatility and enabling accurate cost prediction. Other features and benefits include flexibility and extensibility via custom user smart contracts (a.k.a. dApps). Both on account of its geographic distribution and the decentralized design of the network, Remme Protocol can be regarded as one that eliminates the greatest weaknesses of traditional PKI concepts that were designed more than 30 years ago.

The era of PKI controlled by certificate authorities is coming to an end. The evolving needs of enterprises, their increased connectivity, and the enhanced capabilities of ever more sophisticated attackers have necessitated a transition to a more resilient alternative. That alternative resides on the blockchain, where many of the fundamental weaknesses of traditional PKI do not apply. Blockchain is not a security panacea, but in the context of PKI, there are compelling benefits to be had from utilizing a decentralized environment.

Remme Protocol capitalizes on these benefits, delivering them in a package that is sufficiently decentralized, wrapped in an interface that is sufficiently familiar to businesses accustomed to interacting with certificate authorities. In the years to come, decentralized solutions such as Remme Protocol will become the norm, as PKI consuming apps transition to a next-gen approach that can meet the needs of the ecosystems of connected people and devices.

Ask our technical sales team to see how Remme Protocol can be handy for your specific use case.