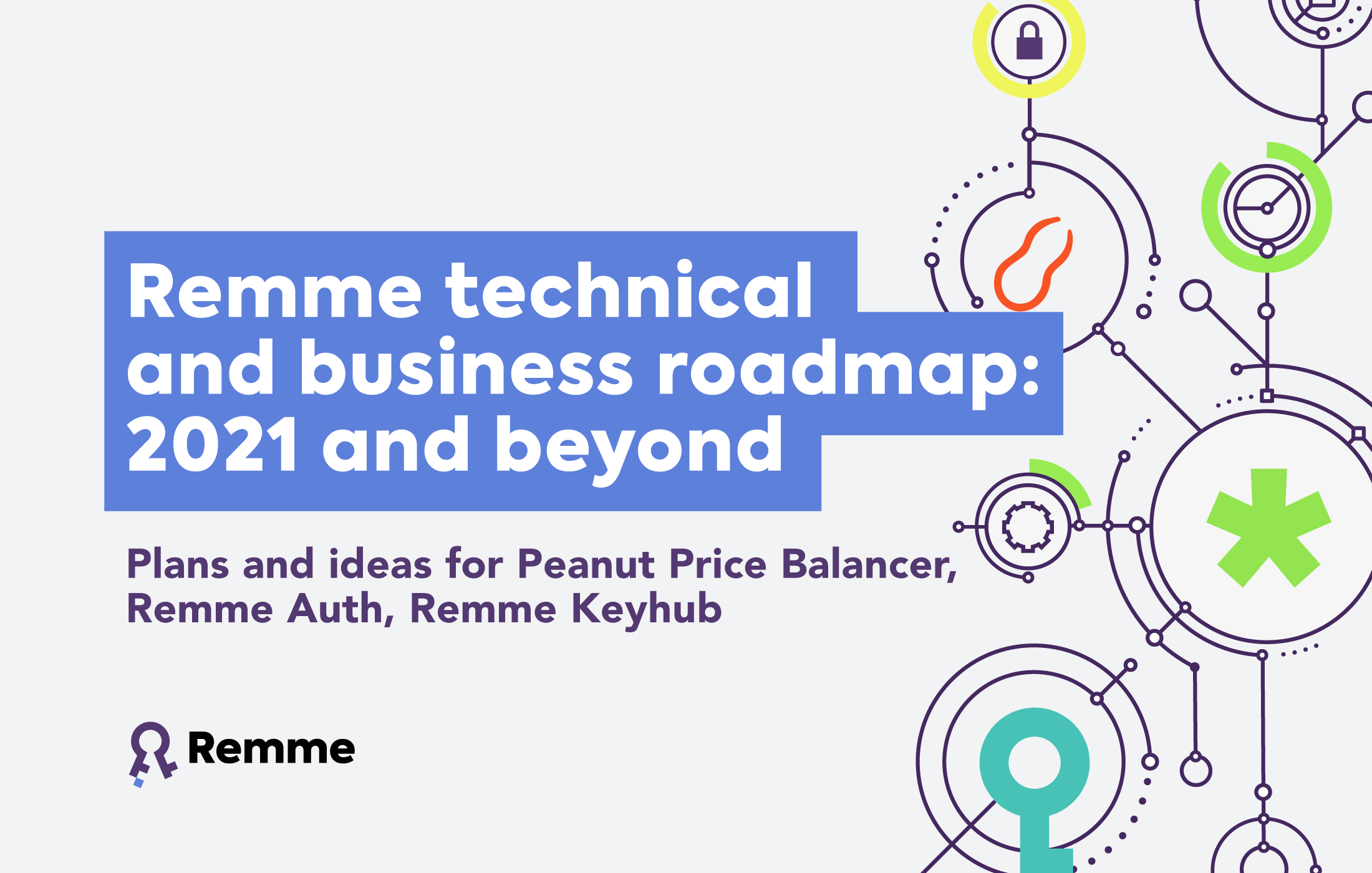 2020 is in the history books, and 2021 is well underway. Though last year was wretched for many of us due to the pandemic, on a company level Remme clicked into top gear. So much so, in fact, that we were recently named one of the top cybersecurity companies in Europe-2021 by Threat.Technology. Having successfully launched Peanut (NUX), we are currently busy developing our new products and commercialising existing ones. So what’s on the horizon for Remme in 2021? Let’s take a look.

Peanut is a set of smart contracts that automatically balance prices after each trade to help liquidity providers (LP) earn more and reduce slippage with no manual effort. It provides a slew of benefits: less impermanent loss; reduced slippage; rewards via governance tokens; no manual effort. Best of all, Peanut grants all of the above automatically.

The Peanut project is a major focus for all the team. Between the NUX public sale and Uniswap launch, Gate.io and MXC listings, and our partnership with Curve, there have been many important milestones – but it’s only the beginning. The Remme team has concluded the first NUX buyback (11.5 ETH) which utilized profits from the alpha version of Peanut’s trade-bot, and the second $NUX token buyback promises to be even bigger due to increased revenues.

Peanut’s trading algorithms have been continually refined, with improvements made to both trading speed and front-run protection. We have also been working on extending the number of supported DEXs for price balancing in-progress, with the addition of Sushiswap, Curve, and Balancer. Development of BSC and PancakeSwap integrations has commenced and is expected to conclude in a few short weeks.

Peanut now offers a new service – sniping protection for projects that plan a Uniswap listing. We’ve had 3 successful partnerships with recently listed projects, though we’ll need to stay tight-lipped for the moment due to NDAs. Rest assured we will publish more information about this service and forthcoming partnerships next week.

Peanut recently became the golden sponsor of BlockchainUA and Hackathon, the largest industry event in Ukraine, scheduled to take place in Kiev on March 26. Alex Momot will be one of the key speakers.

Important as it is, Peanut represents just one of our priorities. As a blockchain market leader, Remme is keen to contribute to the recently announced European Blockchain Strategy, part of the European Blockchain Observatory and Forum. This European Commission initiative to accelerate blockchain innovation within the EU, the EBS is a collective effort of all 27 member states, as well as Norway and Liechtenstein. Having previously worked with the Australian government, we are eager to develop our relationship with authorities in Europe and Asia.

Auth is our 2-click authentication solution enables users to access a website without passwords. Instead, the solution uses blockchain technology. It protects against 90% of cyber attacks, including man-in-the-middle threats.

Despite a tough coronavirus year, the team concluded its fruitful pilot with BMW. Now we are focused on Business and Enterprise editions of Remme Auth, and targeting entities with 1,000+ internal users (employees). Of course, a single company could have millions of external users (clients). With Auth, it doesn’t matter which type of user has an account – though companies are typically willing to spend big on the security of internal users.

The first major outbound marketing and sales campaign, which is focused on business users, starts on March 26, 2021. The aim of the campaign is not only to attract new users, but also investigate evolving business needs and requirements in the post-Covid world.

Due to significant changes in the market, the Remme Auth Android app is still in-progress. Onboarding screens are finished and the team is currently refining the settings programming. As per the project work-flow, the coming weeks will be devoted to the activity-tracking features of the app, as well as users’ profile design and settings. The beta-version release of the Android app is slated for Q2, 2021, and there’s every possibility that the iOS App will also be slightly redesigned later this year.

As an app and solution, Remme Auth offers a great deal of potential for different markets, among them:

As part of our marketing drive to create greater awareness of Remme Auth and passwordless authentication, our plans for 2021 include:

Earlier this year, Auth caught the eye of several major manufacturers – one of whom is now at the negotiating table. Without giving too much away, things are looking very promising.

Keyhub offers the proper lifecycle management of digital certificates as an integral part of the company’s information ecosystem. Remme Keyhub is designed to help SecOps and NetOps experts discover, organize, and track SSL/TLS certificates so that nothing stays off the radar. It’s extremely useful for tracking certificate expiration dates, potential vulnerabilities and policy violations.

As Keyhub is already utilized by several blue-chip clients (ICANN, SRS Distribution, Infrasoft Corp, GlobalSign), our immediate plans are to focus on expanding our presence in enterprise segments – especially in the IOT industry.

As ever, keep an eye on our social media pages to stay in the loop.