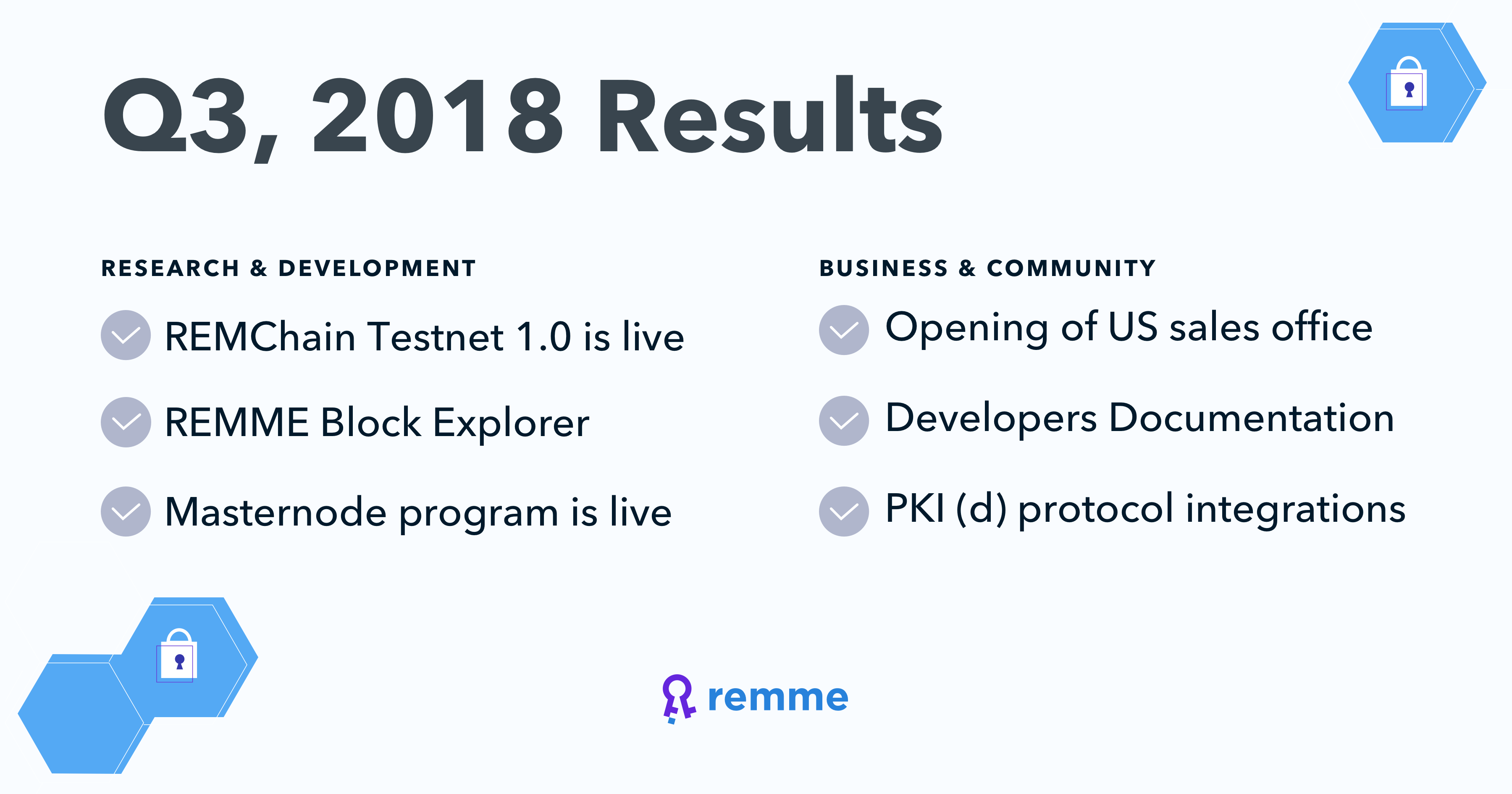 We’ve made significant progress since our Q2 update was published three months ago. As you’ll see, we’ve not been resting on our laurels, with a lot of the accomplishments that this quarter has brought us coming courtesy of REMME’s R&D team, as part of the recently launched REMME Research Lab initiative. This dedicated group of researchers have done some stellar work in investigating token economic models and poring over consensus algorithms in search of the best fit for REMChain.

At the same time, we’ve been working closely with pilot program applicants and participants on integration of the REMME protocol. In doing so, we’ve conducted extensive analysis of the existing problems faced by potential businesses in the field of identification and access control based on the distributed PKI paradigm.

As a result of the work that’s taken us in these two directions, in Q3 we have:

The updated version of the protocol will become the new standard for building distributed semantic validation spaces with a wide range of applications:

In Q4 of 2018, the updated concept controlling the REMME PKI (d) protocol 2.0 (Semantic Validation Protocol) and token economy model will be presented.

Now let’s check the details on what we’ve been doing during Q3, 2018. While we’re planning to update our Project Roadmap for 2019, you can check the actual version here.

REMChain is one of the building blocks of our solution, and a basic layer of our distributed Public Key Infrastructure (PKId) protocol. In a nutshell, it’s a multi-purpose blockchain that acts as a distributed storage for a certificate’s hash, state (valid or revoked), public key and expiration date.

Here’s how you can interact with the test network at the current stage:

Documentation. From now, all the technical documentation lives at a dedicated portal. We’ve organized and structured all of our docs and begun to post new documentation. Here are some updates:

API and Libraries: tools to communicate with REMME test network.

Right now, the public testnet contains five servers (one genesis + four nodes). The server data is hosted by DigitalOcean and Vultr and the servers’ geolocations are:

Configuration of servers at the moment:

Our masternode program is now live and will be accepting applications from the public until October 17th. Getting to this stage has been a huge undertaking that’s required extensive coordination on all fronts, and we’re delighted to have reached this milestone. Masternodes will be an essential part of REMChain, as they will provide fault tolerance and be used to sign and revoke certificates, while fully distributing the network to ensure that REMME actually puts the (d) in PKI (d)!

REMME token-holders are cordially invited to apply to operate a masternode. If approved, applicants will be required to stake REM tokens, and in return will earn a portion of the block rewards when their node is chosen. Upon completion of the application period, we’ll also be revealing full details of the custom consensus mechanism that will be controlling the nodes on REMChain and making final preparations ahead of our mainnet launch. Please note that to ensure all masternode applicants are treated fairly, we’ve devised a system which strikes a balance between prioritizing early adopters without excluding newcomers to the REMME community. More details can be found here.

We’ve also put a lot of work into refining atomic swaps during this past quarter. Also known as as a Hashed TimeLock Contract, this is a technology that enables trades between two agents on different ledgers without the need for a third-party. In the case of REMME, we’re using atomic swaps to enable REMME’s native REM token, which operates on the Ethereum network, to be exchanged for corresponding tokens on REMChain. By using atomic swap technology, we can eliminate the need for a centralized exchange and the inherent security risks that such systems introduce.

To summarize, then, the Atomic Swap transaction family provides a means for universal exchange between two agents in separate chains. There are a few definitions we need to introduce to formalize agent names during the exchange:

Solicitor: An agent hosting the swap and ready to solicit the exchange

Currently, REMchain provides a bot for liquidity that solicits the exchange for the most demanded 1:1 ERC20 REM <=> REMChain token swaps.

You can read the full technical description about atomic swaps here.

A pricing oracle is a new concept that will become part of an integrated customer service solution, which consists of three modules: Atomic Swap (this solution is implemented and is in the testing stage), Pricing Oracle and Billing (under development). The final concept for this component will be presented after the release of the REMChain public mainnet.

REMME Core is currently available for developers and integrators working with Active Directory and SCADA systems through through light clients:

At the current stage, the team is conducting internal performance testing and vulnerability analysis within the framework of the REMME testnet being launched. Public testing and a massive bug-bounty program will start after the updated consensus algorithm has been implemented into the REMChain Testnet 2.0.

Opening of US sales office

During this quarter we’ve received a new bunch of applications and requests from around the world. After careful analysis of all current and past applications, and keeping in mind that our sales offices will support enterprise clients, we’ve decided to open our first office in the USA instead of London (as it was initially planned). Sid Desai, Head of Business Development at REMME, will lead the US office and grow a local team once we start growing.

Sid will oversee our team in what is a strategic region for REMME’s pilot program, and we look forward to concluding many more partnerships in the months to come, moving us closer to our goal of eliminating passwords and creating a secure internet for enterprises and their customers.

Thanks to having changed the format of our Pilot Program from phase-based into an ongoing scheme, we’re happy to be receiving more and more applications from companies who are now interested not only in REMME WebAuth, but also in integration of REMME protocol into smart devices, and pre-registration for beta testing of our Certificate Lifecycle Management product.

REMME WebAuth is still attracting a lot of attention, as it was first of the REMME PKI d protocol use cases presented to the public. During these past three months, we’ve prepared all the main documentation and tools to make the integration process for WebAuth easy and smooth for developers. From now on, everyone who is interested in using it on a website or for a web application can do so even without our assistance, using the instructions to be found in documentation or video tutorial.

For those teams that have applied for testing and have tech questions, or need assistance, we’re creating dedicated chat rooms to further guide them through the process and communicate. This approach helps us to expand the number of use cases for the REMME protocol, involve developers who are ready to start building apps on top of it, and grow the ecosystem. Only during the latest hackathon, 10 teams built their solutions on top of the protocol, including a solution for storing human biometric information in REMME certificates, contactless authentication to ATMs, and much more. We can only wonder at how this number will grow with further evolution of our Tech community in Discord.

👋 Thanks for following us on this journey so far. Stay secure and stay posted for more exciting developments!