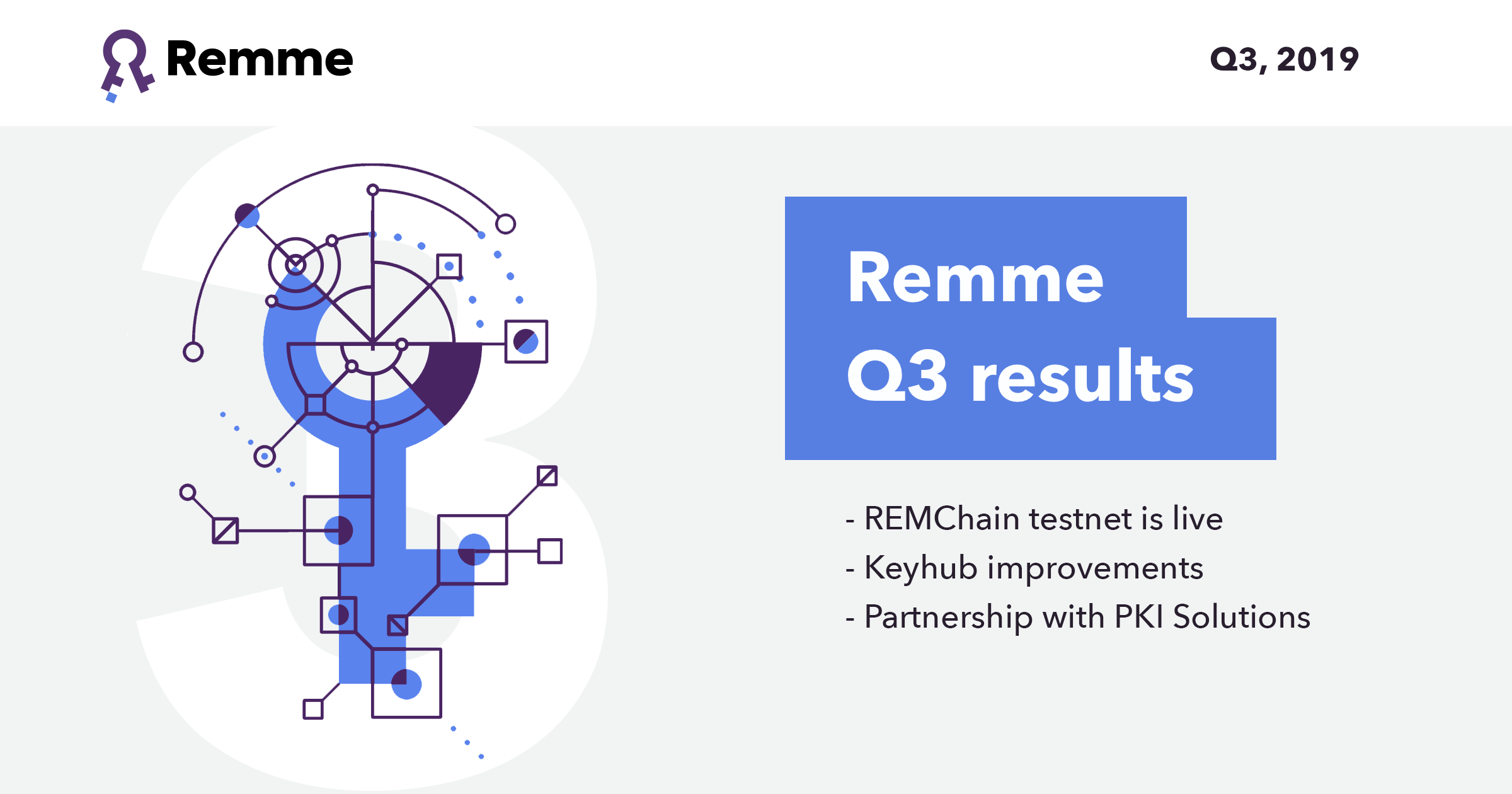 Welcome back folks, it’s time for our next quarterly update. This time we’ll be taking a look over Q3 2019, and taking stock of events following our decision to switch to the EOSIO blockchain. This decision has already paid dividends in this quarter, and should continue to do so as we look ahead to Q4.

There’s absolutely no doubt that the main milestone of Q3 was the launch of the Remme testnet. Following our switch of REMChain to EOSIO, we were kept busy building and testing the code to ensure a bug-free successful launch. In fact, our first contribution to the EOSIO repository was to fix a bug related to the list of active block producers – an improvement was swiftly accepted by the EOSIO team.

We have now managed to present the first version of our testnet to the community. The current testnet allows users to test the token transfer function, stake/unstake resources, vote for block producers (BP), and perform token swaps. If you want to find out exactly how to set up a REMChain testnet, the full details are here at REMChain testnet is live.

Now that the testnet has been running for two months, we’re able to provide some key numbers covering that period:

With testing well underway, the time to deliver the full mainnet is fast approaching. As we prepare to launch, and while we’re playing with the testnet to make sure the process is as smooth as possible, let’s remind you why it’s a good idea to join us. We’ll also endeavor to help you to select your role within the Remme ecosystem.

The following summary comprises our global vision of the Remme product suite and explains all of the components of the Remme 360º ecosystem. We’ve also outlined the functionality of our Identity and Access Management products. A digital key is at the heart of each Remme product within the IAM ecosystem, and with it we can create decentralized IDs for both humans and machines.

The time for next-generation Public Key Infrastructure (PKI) is now arriving, and that PKI will reside on the blockchain. This is a technology the public is ready for and Remme will be well placed to deliver it. For anyone looking for a primer, we’ve provided an easy to follow explanation on how the technology works. See: Remme Protocol addresses the pain points of traditional PKI.

For interested parties who wish to dig deeper into how the smart contracts work, what they are, and how they interact with these Remme Protocol components, our Remme Protocol System dApps explains things in full.

There are a great number of use cases for Remme products, from user and smart device authentication to digital key management, domain validation, email signing and encryption, and code signing. All of these become possible thanks to Remme Protocol’s blockchain layer which hosts identity information with attributes. Remme is also building dApps on top of the protocol. One such dApp, Auth, is for the management of human digital IDs. Another, Keyhub, is designed for the management of machine digital IDs, allowing enterprises and regular users to create key-based identities on the blockchain.

When joining REMChain, it’s worthwhile considering the type of role you might want to take in the network’s operation: Block Producer or Guardian. Block Producers run the validating nodes which ensure Remme’s continued decentralization, while Guardians are involved in the governance and voting systems of the ecosystem. In either case, BPs and Guardians should be aware that we have recently changed our rewards distribution:

You can explore detailed info on how to become a REMChain participant in Join REMChain. Join now!

Keyhub is an increasingly integral part of the IAM ecosystem. It’s designed for managing machine digital identities and the development team are regularly improving its functionality and features, with new updates every other week.

Keyhub now facilitates the scanning of both internal and external networks. It further allows users to group certificates, schedule reports and expiration alerts, and upload and download certificates manually. We’ve also significantly improved the certificate single view card and its associated filters, adding section tools with certificate and CSR decoders as well as CT log monitoring. You can always check out the updates in our changelog or register for free to give it a spin.

While developing Keyhub, the question arose as to how organizations from different industries are progressing with their SSL/TLS management. One of the great things about a tool such as Keyhub is that it makes it incredibly easy to find out. Analyzing the top 50 websites of the world’s leading companies it was possible to deduce the state of PKI management in their organization, discovering whether they have any gaps or vulnerabilities in their current setup and highlighting the best practices.

From this it was possible to create reviews of these three industries, which are presented below:

There’s also great news for our partner network which has recently expanded with the launch of PKI Solutions. By uniting forces with key industry players, we’re determined to expand the reach of enterprise security.

Secondly, we’ve welcomed our new Chief Technology Officer, Roman Cherednik, who is now navigating the company through the tech challenges across our IAM products. From the moment of his appointment, Roman was actively involved in Remme’s participation in industry events. Together with our CEO Alex Momot, he spoke at the annual BlockchainUA conference, talking about the decentralized ID and passwordless auth at a Web3 Development Night in Kiev.

We also participated in the 2nd Global Enterprise Blockchain Benchmarking Study released by CambridgeAltFin. With over 160 entities surveyed and 67 live enterprise blockchain networks analyzed, the full report has been finally released to the public and contains some interesting insights.

For those who wish to do a little supplemental reading this month, we recommend these posts as particularly worthwhile:

Closing out the year with Q4

2019 has been an exciting year for Remme with a great deal of progress made already. Now we’re really beginning to switch through the gears as we hurtle toward the end of the year. The first task will be to gather data from the community on the first testnet before we move on to the second stage testnet. With each new iteration of the testnet we will be collecting feedback, gathering data and conducting tests to bring improvements. All of this will be highly important as the team looks forward to launching the mainnet at the end of the year.

That’s right, we’re announcing today that the Remme mainnet will launch in 2019. We’d like to thank you all for supporting us this far and we look forward to catching up with you in another three months, when we’ll be looking ahead to everything that’s in store for 2020.