Remme Q1 results: everything we have achieved so far in 2019 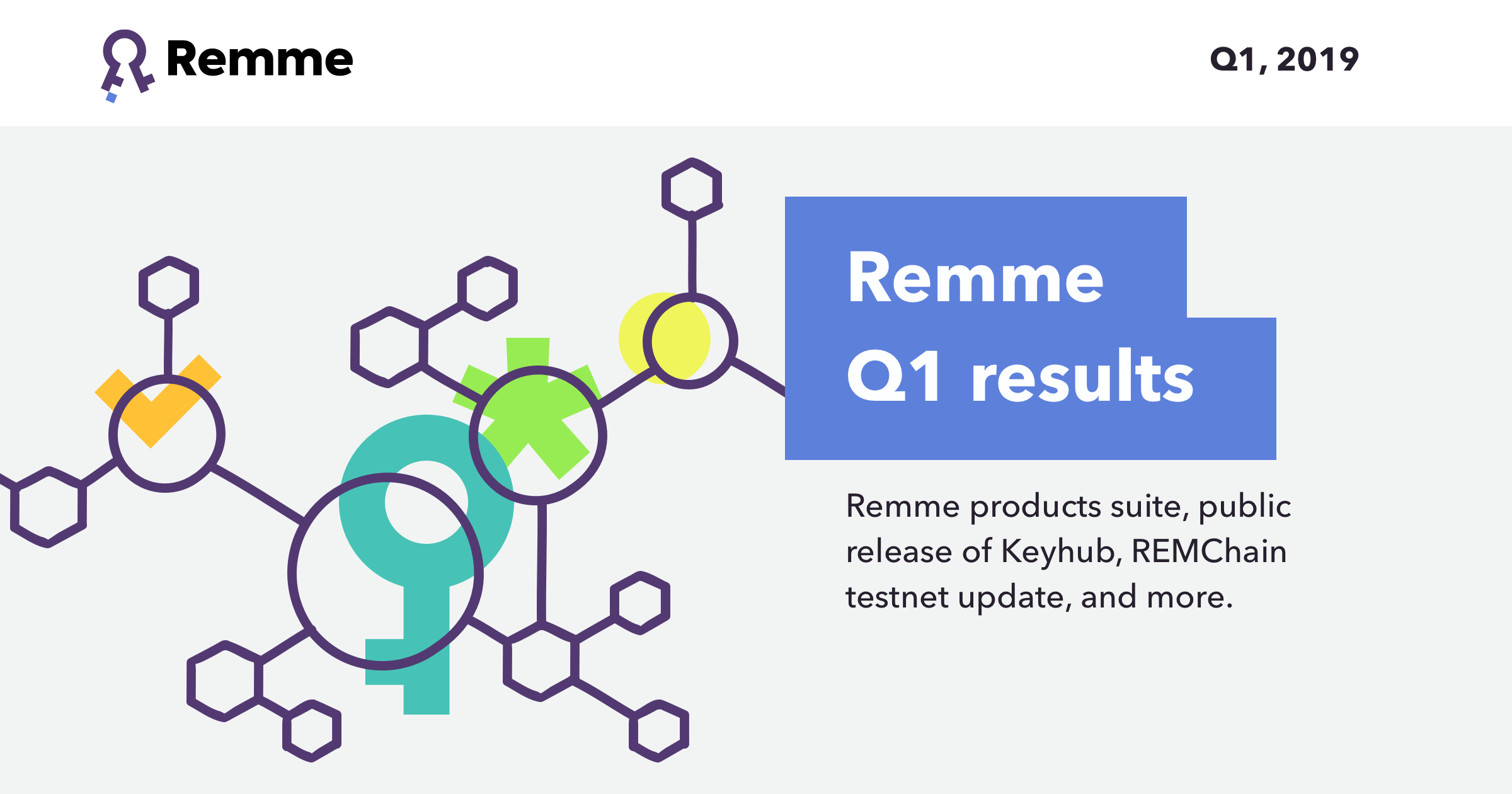 It may not feel like it, but the first quarter of 2019 is already over, having crammed more news, challenges and discovery into the first three months of the year. That’s how it’s felt in our world, at least. Rather than pause to dwell on the ever-shifting wonders of space and time, however, we’re going to take this opportunity to summarize everything that’s happened at Remme since the start of the year, before getting back to work and making the most of Q2.

The greatest progress we’ve made over these past three months has been in shaping our suite of Remme products. At the heart of it all is still Remme Protocol, our blockchain-based Public Key Infrastructure that’s designed to create a decentralized Network of Trust. It’s the hub around which our ancillary products revolve, and marks the biggest breakthrough in everything we’ve been working on over the last years.

Complementing Remme Protocol, we have Remme Auth, a 2-click authentication solution for web access that’s anchored to the security of the main chain. It safeguards against 90% of cyberattacks, and is pivotal in leading the fight to create a safer web for everyone. Completing the trinity of core products we have Remme Keyhub, our lifecycle management tool for digital certificates. It provides a single portal from which to organize and track all your SSL/TLS certificates so you need never worry about certificate management again.

All of our work in Q1 2019 and beyond has been focused on developing and improving these products, as well as on bringing them to a wider audience of enterprise users who stand to benefit from incorporating these solutions into their workflow. In particular, we’ve made great strides with Keyhub this past quarter. Released in public beta in mid-March, Keyhub has recorded 135 registered users, who are tracking and managing almost 2,000 certificates.

We are excited to announce that Remme has launched the new version of our public REMChain testnet. In this release, everyone is able to connect a node to the testnet and support it as a node. However, to gradually increase the load on the network and qualitatively analyze its operation, only 10 randomly chosen users became a masternode at the first stage. The Remme team continues working tirelessly to provide everyone with the access to testnet in the nearest future to pave the way for the full mainnet release of Remme Protocol.

Out and about with Remme

While our most important work has taken place in the lab, we did find time to slip away from our screens and meet our growing community – plus many of our existing and prospective clients – at a number of events. The pick of these was the hugely influential Gartner Identity & Access Management Summit, where Remme had a strong presence. In addition to our branded booth, which was a hive of activity all weekend, our Head of Business Development, Sid Desai, gave a well received speech on how digital transformation will drive the future of IAM design in the machine age. His talk was the second most well attended at the event, with only the IBM keynote attracting a bigger crowd.

Check out how it was in our Gartner IAM Summit video recap.

Meanwhile, back in Remme HQ, our development team have had a very productive Q1. We’ll keep the highlights brief, but click the links to learn more about the stellar work they’ve been doing:

Finally, lest you needed any convincing that we haven’t been taking it easy in Q1, here’s a roundup of some of the media outlets where Remme has surfaced this year.

The pick of the bunch, in terms of media recognition, has to be Remme being listed by CIOReview as one of the 20 most promising blockchain solution providers . You can read about this accolade, our approach to eliminating single points of failure, and the need for organizations to trust a certificate authority here. In terms of Q1’s media coverage, here’s the best of the rest:

With Q1 now behind us, the focus moves to readying things for the mainnet launch of Remme Protocol and everything that comes with it. We’re not prone to making predictions (we’d rather let our achievements speak for themselves), but we’ll wager this much: Q2 will be even better than the last one. Catch you in another three months for a whirlwind tour of everything that’s been going on in our realm.