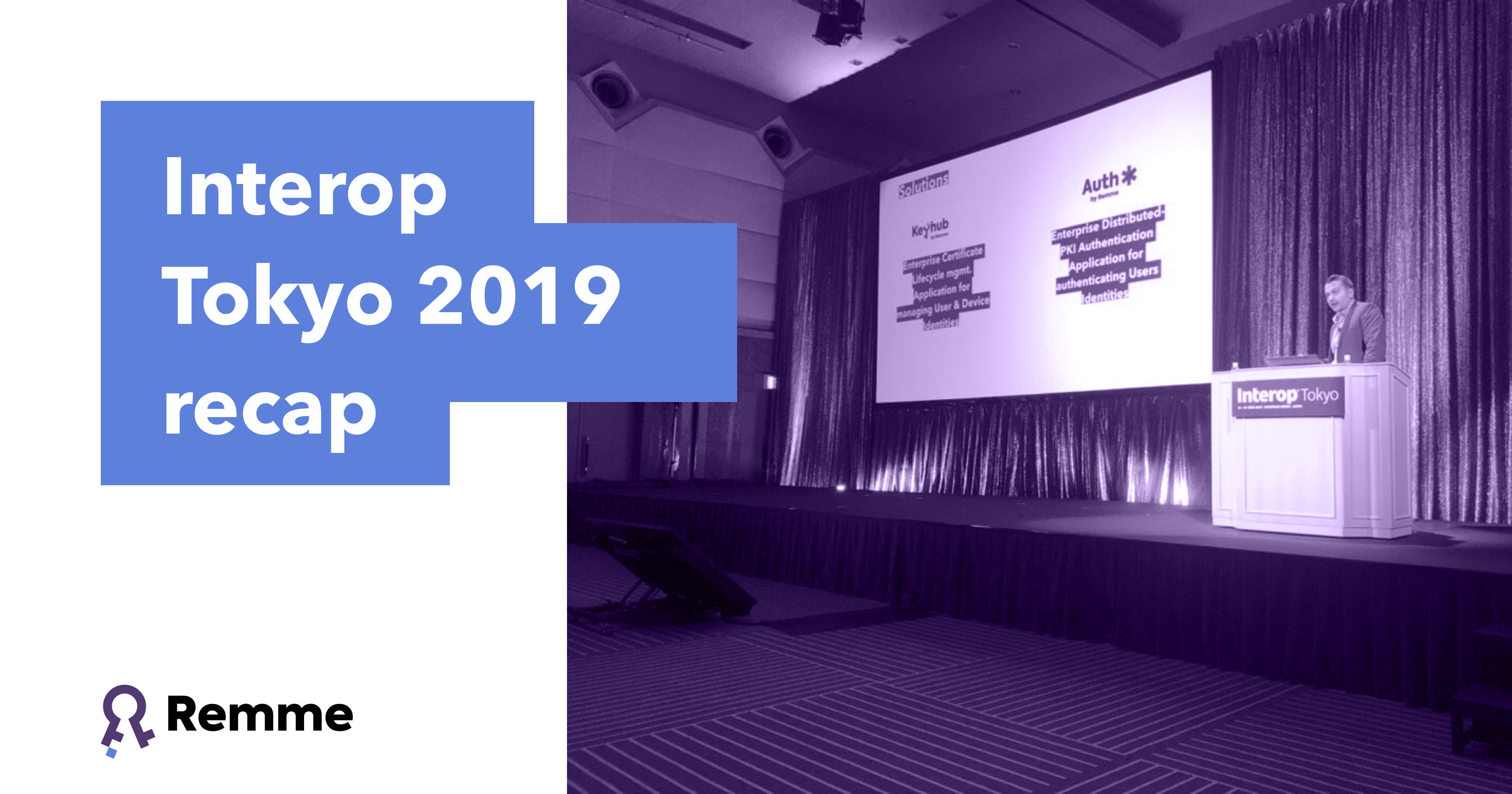 This June the Remme team attended Interop Tokyo, an annual event for information technology around the themes of Internet, cloud, data center, virtualization, security, and wireless. This year, Interop brought together more than 155,000 people, with a wide range of expertise in various fields, for three days of sharing and learning.

Aside from the hot discussions at our booth, Sid Desai, Head of Business Development at Remme, gave a speech on the center stage of the show. Sid talked about the need for new machine-centric authentication and identity management solutions that has emerged due to the volume of tasks now being completed by machines.

After spending three days communicating with industry peers we agreed on the Top 4 industry takeaways that captured our attention.

This topic has been of increasing concern as online activities become ever more important. While researchers look for ultimate answers, the marketplace is moving toward credible solutions, too. Based on conversations at the event we found the importance of encryption is at least becoming reasonably well understood in Japan. But managing digital identities in Japan is still a challenge. People are often reliant on multiple user identity repositories and have not yet implemented a central place to consolidate all identities.

As encryption takes off and more comprehensive management solutions are recognized as critical to mastering the whole digital identity challenge, industry will create a safety net to enable true digital identity systems.

The Internet of Things seems to be moving beyond the hype phase and into real growth. By 2025 there could be over 75 billion IoT connected devices in Japan. While some of the initial excitement, especially regarding consumer-oriented IoT, has dissipated somewhat, the technology itself has continued to mature, yielding real value. This is particularly true on the Industrial Internet of Things (IIoT) or Industry 4.0 side of things, where the potential rewards are so clear and often within easy reach. However, the “dark side” of IoT and IIoT – identity and security – is now a recognized problem.

For that reason, IoT management and IoT device authentication is something that a lot of organizations are now focusing on. However, as encryption tools are adopted by organizations and applied to IoT systems and users, this paradigm will shift, allowing IoT and IIoT to flower and reach its enormous potential.

No matter what tech event you attend, it doesn’t take long before the conversation turns to the threat environment. That was true at Interop, too. In some ways, not much has changed in the last year or two. Phishing and ransomware attacks seem to be the biggest threat to enterprise security in Japan (and elsewhere). But what has changed is the frequency, intensity, and sophistication of attacks.  The problem has moved the the national level, with the Japanese government releasing its next cybersecurity strategy.

Fortunately, this is sparking a renewed look at underlying technologies like encryption and even concepts like “zero trust”.  The corporate management begins to realize that the problem isn’t going away. In 2017 46% of Japanese companies already started implementing fundamental security strategies and the number will likely grow.

Blockchain: not that popular

Even though Japan represented some of the earliest adopters of Blockchain technology it is still not a widely discussed topic/technology for the enterprise market at Interop. When talking about decentralized authentication, we found many people showed some initial interest. But then they question why they would need to rely on blockchain to accomplish that task. So, the impact, when it comes to the potential real-world benefits of blockchain are low in Japan.

But this may still change. There are functions for blockchain, particularly in supply chain and transaction assurance roles, that are becoming more compelling. And second generation blockchain technology will be faster and able to sustain a higher transaction rate. So, it will be interesting to revisit things in another year or so.

In summary, our team was happy to be a part of the industry-leading event and share our vision of IAM in Japan.  We heard encouraging levels of interest and positive comments.  But, beyond that, these events are such a critical chance for exchanging ideas and moving industry forward. That made the experience even more worthwhile.